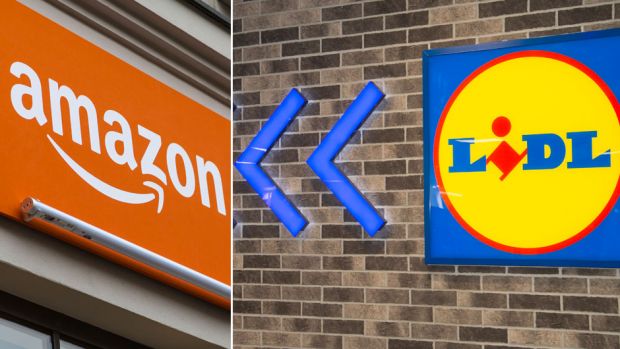 LZ-Fotomontage
Amazon and the Schwarz group (Lidl) have more in common than one might think.

Artikel anhören
Facebook
Twitter
Mehr zum Thema
Online-Geschäft
Amazon will Food stärken
Rekordumsatz
Schwarz-Gruppe knackt die 100-Mrd.-Euro-Marke
US powerhouse Amazon and German retail heavyweight Schwarz Group are both winners. They come from different worlds and seem to have little in common. But a comparison of their successful concepts shows a number of similarities.

Both companies' sales are growing exorbitantly. In the world sales ranking, Amazon is number three, the Schwarz Group number four. From 2014 to 2019, the Schwarz Group has grown by more than EUR 30 billion, without significant acquisitions. Amazon has grown more than six times as much in the same period. By the equivalent of around EUR 183 billion (net sales), including the marketplace business.

Both players are internationally positioned, but Schwarz is ahead when it comes to the number of countries. The Lidl parent company operates an enormous network with more than 12,000 locations in 30 European countries and the US. Amazon is currently represented by online shops with their own URL in a total of 17 countries in Asia, Europe, North and South America and Oceania.

At the Schwarz Group, the origin of the business idea comes from Germany. In addition, the domestic market is responsible for almost one-third of total sales. A large part of the Americans' revenues also come from Germany, where Amazon's 2019 sales totalled EUR 19.8 billion (net). Germany is the largest foreign market for the e-commerce provider.

Jack of all trades

The Schwarz Group operates electric filling pumps, is a partner in an electric car sharing platform and, like Amazon, is building its own cloud infrastructure. It is regarded as a pioneer of backward integration and has developed into an important food manufacturer. At Amazon one can speak of a real metamorphosis - from an online book and media retailer to an all-rounder: streaming service, electronics manufacturer, audiobook provider and e-book platform. Amazon is picking up speed, especially in logistics, and is expanding its own warehouse and delivery networks.

Amazon often announces new things: from delivery drones to payment by handscan. In the warehouses, thousands of autonomous robots transport the merchandise shelves to the commissioners. In 2018, Amazon invested USD 22.6 billion in research. In 2018, the Schwarz Group bundled the IT departments of Kaufland and Lidl into Schwarz IT. In several European countries, it is testing self-service checkouts and mobile self-scanning with customer cell phones. The Neckarsulm-based company has participated in the German Research Center for Artificial Intelligence. In joint projects, robot applications and chat offers for automated customer communication are being developed.

Schwarz has developed into a globally active waste disposal service provider. The Neckarsulm-based company analyses the flow of recyclable materials from companies and provides them with pressing machines, for example, to form cardboard, plastic film and PET bottles into bales. Amazon makes its growing infrastructure available to its marketplace partners for a fee. These can transfer Amazon storage, fulfillment, returns processing, invoicing and more. The cloud service "Amazon Web Service", was also extended to external customers early on. The sale of external providers on Amazon Marketplace accounts for over 50 per cent of sales.

Lidl has closed down purchased cooking box start-up Kochzauber, Kaufland its food online shop. Kaufland withdrew from Australia before opening a location. The conversion of Lidl's merchandise management system to SAP standard software was stopped, a Click&Collect shop called Lidl Express never opened. And at Amazon, too, failure is virtually part of the program. Among the failures were the dash buttons for reordering consumer goods or the smartphone Fire Phone. "When a company grows, everything must be scalable, including the size of the failed experiments," explains Amazon CEO Jeff Bezos.

Amazon has created a unique customer loyalty system with its paid Prime program. It has more than 150 million subscribers worldwide who can take advantage of free fast shipping, music and video streaming, exclusive offers and discounts - for example on diapers in a savings plan. Lidl has developed a mobile phone-based loyalty system called Lidl Plus, which is currently in use or under test in ten European countries.