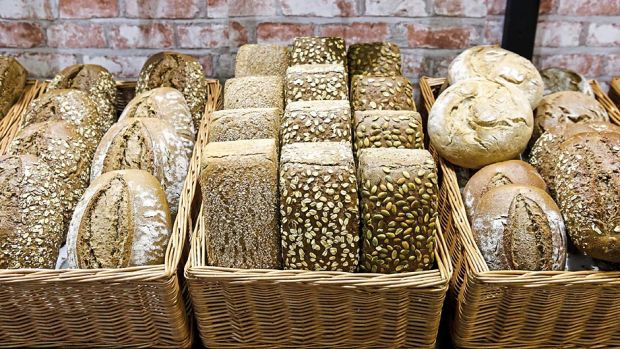 Koelnmesse
Bread and pastry exhibitors will be accommodated in Halls 2.2 and 3.2.

Artikel anhören
Facebook
Twitter
Mehr zum Thema
Ernährungstrends
Großbäcker backen Gesundes
Ranking
Top 20 Bäckerei-Filialisten 2019
The increasing variety of international specialities in the national food markets is regarded as a Europe-wide trend. The combination of different influences into baked goods is on the rise.

A glance at the list of exhibitors in the Bread & Bakery segment shows that the trend towards the international character of Anuga has continued. German market leader, Harry Brot (3.2/C038), also focuses on the traditional: "Spelt, the grain of the past, is well received by consumers", is the current recipe for innovations from Schenefeld. Harry had already successfully occupied the segments on the self-service shelf. The range will be completed with a new spelt stone oven baguette for ready baking from October 2019, flanked by a seed-rich bread that completely does without wheat flour.

National suppliers have once again pulled out all the stops this year to impress visitors: Mestemacher, supplier of special breads (3.2/C021-C029), for example, is taking part in this year's bread revolution: "Our Pure", an oat wholemeal bread, completely dispenses with flour and yeast. It consists of a quarter of selected oilseeds and can score points with plenty of omega-3 fatty acids.

D. At Anuga, Entrup-Haselbach GmbH & Co KG, specialist for deep-frozen baked goods (3.2./A021-A029), will essentially be presenting innovations on two core themes: "We will be presenting rustic wood-fired oven breads with a wide variety of ingredients, as well as reinterpreting various pizzas," reports a company spokeswoman. The focus this year will also be on the to-go segment, for which the traditional company has come up with some ideas. The new donut generation is also good for a surprise or two: from slightly salty to spicy to Christmassy, the Kringel biscuit has everything.

When two 100 years become, one celebrates. Ditsch (3.2/A058) sees himself and the caustic fully in the trend. Björn Tiemann, Head of Sales & Business Development: "Our innovation drive continues unabated." The starter of the anniversary year is the ready-baked pretzel with salted butter filling. Managing Director Gooding: "Our goal is to remain the lye champions in Germany and to continue growing in Europe and the USA. We rely on our quality and reliability towards our customers." The Ditsch pretzel bakery is a medium-sized company and part of the Valora Group, the Swiss convenience retailer.

Coppenrath Feingebäck (3.2/A4041) brings an innovation to the biscuit shelf with the new "Lakritz Coooky", a cocoa double biscuit with liquorice cream filling. The Emsländer region sees further potential in the area of sugar-free and gluten-free biscuits.

Ölz, the traditional baker from Austria (H 3.2/C039), relies on proven methods. With Milch Brötle Vollkorn, the company is now offering its top seller a rustic version as well. Fresh alpine milk from Austria and valuable wholemeal wheat flour with a high fibre content is the recipe for the product, which in its original form is already well represented in the German food retail trade. Thanks to the careful production of Ölz Meisterbäcker, this yeast dough biscuit is also free of preservatives.