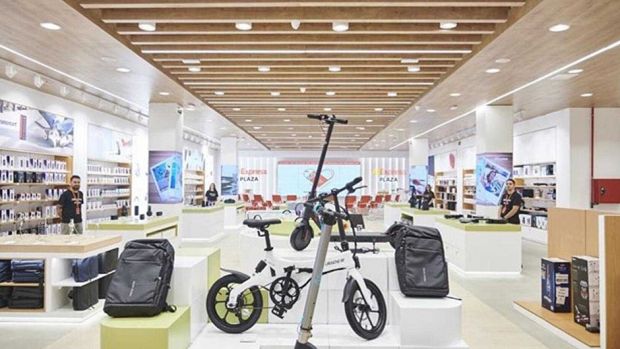 Aliexpress Plazza
In Madrid, Alibaba has opened a 740 square metre shop in the Xanadú shopping centre.

Artikel anhören
Facebook
Twitter
Mehr zum Thema
Milliarden-Deal
Alibaba will Kaola kaufen
Internet-Händler
Alibaba verdoppelt seinen Gewinn
Umstrukturierung
Alibaba gliedert Supermarkt-Geschäft aus
Chinese online giant Alibaba is pushing its multi-channel strategy in Europe. The company has opened its first Aliexpress store in a popular shopping centre in Madrid.
The Chinese online giant Alibaba is targeting Europe: Now it has opened the first shop of its platform Aliexpress in the Spanish capital. The 740 square metre shop is located in the Xanadú shopping centre on the outskirts of Madrid. Nonfood and electrical articles such as electric scooters, suction robots, coffee machines, smartphones and headphones are offered. A few months ago, Alibaba had already tested its physical presence in Madrid with a pop-up store.

According to media reports, Spain is the third-largest foreign market for Alibaba after Russia and the USA. Although Aliexpress is now represented in Europe for the first time on a stationary basis, the platform itself is now present in 220 countries, including Germany. The Group is increasingly trying to make progress in Europe. Until recently, the platform sold mainly Chinese goods. But now the Group is opening up and also offering products from local suppliers. In the four markets - Spain, Russia, Turkey and Italy - the Chinese are already working with local producers, who can also sell their products in the Group's foreign markets via Aliexpress.

In Spain, there are already 3000 manufacturers who sell their products via the online platform, by the end of the year it should be 10,000. The fact that the choice for the first European shop fell on Madrid was no coincidence, writes the "Handelsblatt". In the capital, Aliexpress has the most customers in Spain. It is a strategic step that is likely to be followed by other stores in Europe. "Spain is Alibaba's gateway to the European market," the newspaper said. (court)