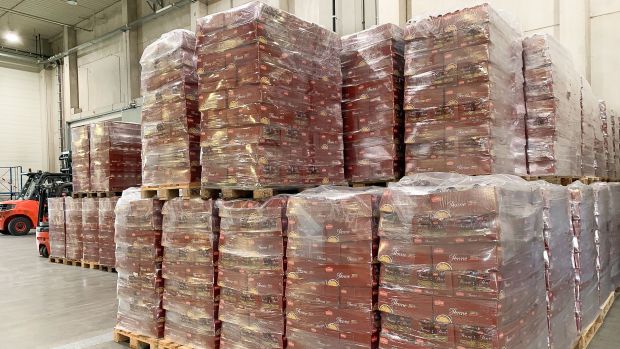 Artikel anhören
Facebook
Twitter
Mehr zum Thema
Logistik in Zeiten von Corona
Händler suchen Notfall-Lager
Nachfrageentwicklung in der Corona-Krise
Das waren die Absatztreiber der dritten März-Woche
Hamsterkäufe lassen nach
Die Rückkehr der Nudel
In addition to toilet paper, pasta has become a new currency in the Corona crisis. To prevent empty supermarket shelves, German discounter Aldi Süd has used special trains to import over 200 tons of pasta from Italy.
In an unusual move, Aldi Süd is about to secure the supply of pasta in Germany.  By using special trains, the discount giant has imported more than 200 tons of pasta from Italy. Over 300 pallets with more than 400,000 packages of fusilli, penne and spaghetti have already arrived in Nuremberg, the retailer said. More than 250 further pallets are on their way.

The corona crisis is leading to more difficult conditions in the supply chain. According to Aldi, transports to Italy are currently becoming fewer and fewer, so there is a lack of trucks for the way back. "The limited capacities mean that cargo is no longer arriving in its entirety in Germany," says Aldi Süd.

The alternative supply chain works like this: Trucks transport the products from the factory of "Cucina" supplier Pastificio Guido Ferrara near Naples to Northern Italy, where the journey continues by rail. DB Schenker is the logistics service provider.

Although the transport takes longer than usual, it does create some leeway. "We are no longer dependent on just one forwarder and can react flexibly to bottlenecks," says Andreas Kremer, Director Supply Chain Management at Aldi Süd. "The manufacturer can be sure that we will continue to accept his products, and our customers can rely on replenishment". There is still no reason for noodle "hamster purchases" (panic purchases), the discounter reassures.