Crisis Management Everything for supply 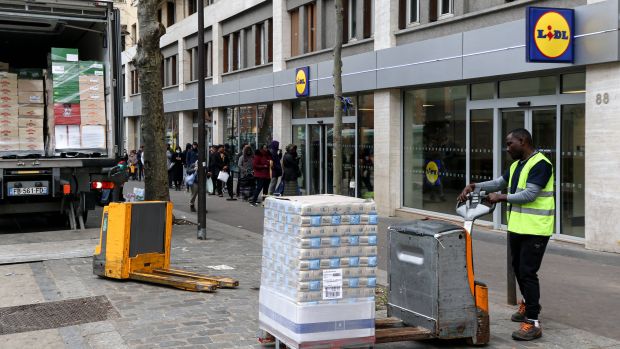 The food sector is largely considered to be systemically relevant in maintaining the basic supply for German consumers, who have been severely restricted in their lives since this week. While electronics or fashion chains, perfumeries and department stores had to close on Wednesday in most federal states, supermarkets, discounters, hypermarkets and drugstores are to be allowed to open on Sundays in future.

State and federal politicians are working with top managers of the food industry on crisis plans. The CEOs of the major retail companies Edeka, Rewe, Schwarz Group, Aldi and Metro are in almost daily telephone conferences with the ministries. Sunday openings are not yet on the agenda as retailers are already lacking staff.

At one stage it was discussed whether the German army, the Bundeswehr, could be integrated into logistical processes. But experts are critical - at least as far as vehicles are concerned. After all, they are unsuitable without a lifting platform and would only create chaos. However, soldiers could be deployed as truck drivers. At the moment, almost all retailers are using additional service providers to ensure deliveries to their stores. On the other hand, non-food retailers and car manufacturers suffered a number of cancellations, which means that certain capacities could be diverted.

Everyone is desperate for staff. On Wednesday, Rewe boss Lionel Souque asked employees from the administration to come to the sales front for supermarkets Penny and Rewe. The local staff cannot keep up with the refilling. Edeka turns to colleagues from the catering business. At their checkouts, Rewe and Aldi are testing protective walls made of Plexiglas.

Beverage giant Coca-Cola is reducing its sales force, but let them help out on-site if possible. The manufacturers of extremely popular articles are running extra shifts to ensure supply. Companies such as Oetker and Iglo confirm their delivery reliability for pizza and fish sticks, but are also working on plans to possibly concentrate on certain fast-moving items.

Crisis prevention in the industry also includes considerations of separating parts of the business. Dairies can cope with higher capacities but are not yet fully recognised as systemically relevant. "Without our production at full capacity, nothing would work," says one producer. Farmers and producer associations are demanding freedom of travel from the EU for harvest workers from Eastern Europe, otherwise sowing and harvesting would be threatened.

HDE managing director Stefan Genth estimates the drop in sales EUR 1.15 billion per day due to the standstill in non-food retail. Together with President Josef Sanktjohanser, he has called for help from the federal government.

E-commerce can hardly meet the huge demand any more. Since Tuesday, suppliers have been storing hardly any goods at parcel shops and pickup stations because these are also being closed. The online industry is now demanding openings for parcel shops. Some independent retailers are already regulating the number of customers in their stores, others are improvising with home delivery.

According to LZ information, hypermarket chain Kaufland is clearing non-food areas, particularly for sought-after food products, both in the warehouse and in the stores.