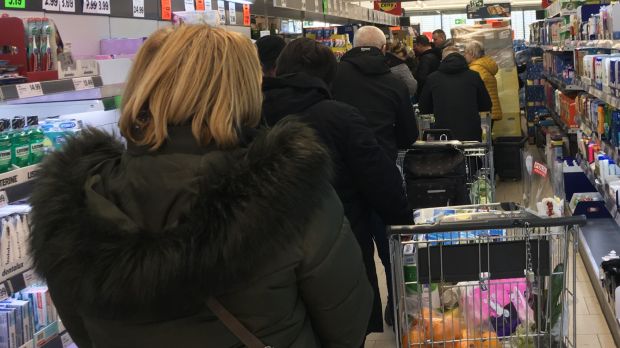 In Italy, an epicentre of the Covid-19, supermarkets' sales, which have been stagnating for years, are growing at double-digit rates thanks to panic purchases. According to the market researcher Iri, sales rose by around 10.6 per cent between March, 2 to 8, compared with the same period last year. "Even sales in hypermarkets, which have long been declared dead, have increased by 1.5 per cent", says Luigi Rubinelli, founder of RetailWatch.

However, retailers across the EU have to deal with the negative consequences of the crisis. The panic buying of many customers is disrupting supply chains, and a growing number of employees are absent due to increasing pressure or illness.

Europe's grocery sector, which has already mastered countless challenges - think of the oil crisis - once again demonstrates high flexibility. A lot of retailers are reacting by hiring temporary staff. In England, market leader Tesco wants to hire "20,000 temporary staff in the next three months". Aldi and Lidl UK are creating 5,000 or 2,500 new temporary jobs.

Practical considerations, however, are forcing more and more retailers to shorten their opening hours. Aldi UK, for example, opens one hour later and closes one hour earlier than usual in order to clean the shops, restock the shelves and relieve the stressed staff. In addition, Lidl UK has reserved its first shopping hour for pensioners.

The majority of retailers are already limiting the quantities sold. Except for special buys, Easter goods and flowers, Aldi UK customers are not allowed to buy the same product more than four times.

In Southern Europe, all retailers have to limit the number of customers who are allowed to enter their stores at any one time and human contact by means of protective barriers at the checkouts. In France, they regulate the minimum distance between customers with dividing lines on the checkout floor. Coffee shops and snack stations have been closed for weeks.

British supermarket chains have hired more security personnel due to aggression against cashiers and jostling among customers. Frustrated individuals have even tried to gain access to the store warehouse by force.

As a result of these protective measures, all retailers who previously encouraged customers to stay, are losing social competence. Their premises radiate the charm of a high-security wing in a prison.

All the more reason for online trading to boom. For example, England's largest pure player, Ocado, doubled its sales in the second quarter of the current financial year compared to the first quarter. However, many websites repeatedly experience temporary failures due to extreme customer demand. In France, retail majors Leclerc, Auchan, Carrefour and Monoprix have had to severely restrict their digital offerings as a result.

Problems on the eastern border

The developments above can also be observed in Eastern Europe to varying degrees. Retailers in the Czech Republic, Poland and Russia are particularly affected by the cross-regional restrictions on border traffic, even on inner-European borders.

In the short term, nationally varying exceptions make cross-border goods traffic more difficult and lead to a situation where shelf gaps for basic foodstuffs are persistent, even for German retailers.

In the medium term, the biggest problem for many Eastern European retailers will be personnel. Even before the crisis, they were already dependent on temporary staff from Ukraine or Romania. According to the latest travel restrictions, these employees will now be absent. As a countermeasure, the big players in the industry, including Lidl, Kaufland and Metro C+C, are paying up to 30 per cent salary bonuses for uninterrupted presence at the workplace.

With continuing adverse effects, however, it is expected that retail companies will pass on the cost leaps in the medium term with price hikes. This will be particularly the case for EU countries that are not in the eurozone but often conclude trade contracts in euros. The Polish zloty has lost 8 per cent against the euro in the last 30 days, the Czech crown 10 per cent and the Russian rouble as much as 25 per cent.