Online Boom during corona pandemic E-food in a balancing act 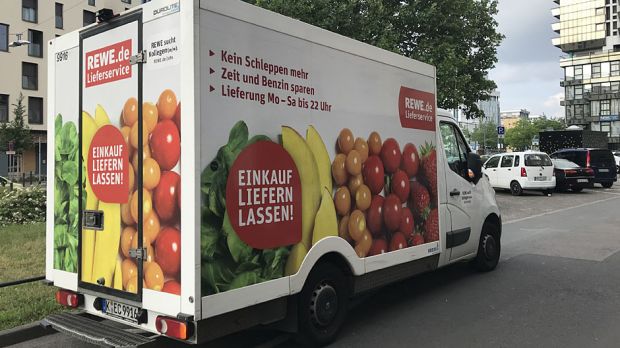 The sharp rise in demand in online food is both a curse and a blessing for the providers. Available time slots for delivery services are in short supply. Many suppliers are responding with additional logistics capacities, adjusting their offer to avoid upsetting customers and relieving the infrastructure.

Even Amazon is struggling with the current demand. Like most other online providers, the online giant warns customers of limited availability of items and time slots. Now it is going one step further: the Fresh membership, which offers unlimited delivery for just under 8 euros a month to prime customers, has been temporarily suspended. Instead, Amazon advises customers to choose the individual delivery for 4.99 euros - if there are time slots available.

German retailer Rewe is also trying not to place an even greater burden on logistics. The company has currently removed its delivery flat rate. Drugstore chain dm has chosen another way to relieve the strain on logistics: since the beginning of the week, the retailer has been commissioning online orders in the majority of its approximately 2,000 stores, where customers can pick them up six hours after placing their order. The express service is also intended to help reduce congestion in the stores.

The massive change in customer behaviour is reflected in the figures of the e-commerce association BEVH. While demand in most categories has fallen noticeably since the beginning of the crisis, it has risen sharply in the food sector. In March, the association recorded a 56 per cent increase in demand for food compared to the same month last year, while the demand for drugstore products rose by almost 30 per cent. A large part of this is likely to have ended up at Amazon.de, as the group had concentrated its activities on product ranges in high demand.  "Depending on capacity, however, we also store other products from our sales partners in the logistics centres", an Amazon spokesperson admitted. However, the decision has led to delivery delays for other items.

Online grocery retailers have difficulties to react quickly to the boom due to the Corona pandemic. The lack of logistics staff from Eastern Europe in Berlin locations affected online retailer for baby and toddler products, Windeln.de. Rewe also sees an obstacle in the fact that additional vehicles are currently neither available nor ready to drive at short notice because the registration offices are closed.

E-food expert Dominique Locher points out that retailers could not deploy more personnel in logistics without restrictions simply because of the protection of employees and customers. "In most countries, e-food still represents a small percentage of the total market - with corresponding structures among the suppliers," says the ex-LeShop boss. "No retailer could therefore really be prepared for the rush of the past few weeks and the sudden multiplication of customer demand."

Opening a new logistics centre in the middle of the crisis, as online supermarket Picnic has done recently, remains an exception. In many places, logistics service providers like Liefery offer help. Managing Director Nils Fischer is currently registering a 30 per cent increase in demand per week. "The e-food providers have already increased their capacities considerably," says Fischer, whose company works for Rewe, Hellofresh and Getnow. The limiting factor is apparently not so much logistics, "but rather the ability to get the bulk of orders out of the warehouse". Fischer, therefore, wants to offer retailers "similar to Instacart" the possibility of collecting the order in the market. "This would relieve retail logistics centres a bit."