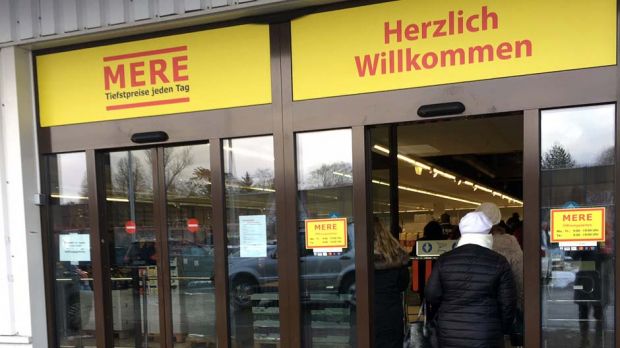 LZ
In February 2019, Mere launched its first store in Leipzig.

Artikel anhören
Facebook
Twitter
Mehr zum Thema
Nach Lieferengpässen
Russischer Discounter Mere ist wieder geöffnet
Lieferengpässe
Zwangspause für russischen Discounter "Mere"
Russischer Billigheimer
So sucht Mere seine Nische im deutschen Discount
Russian hard discounter Mere has opened a new store in Germany and is set to expand into further markets in Europe. In its home country, the retailer made it to the top 10 in the food retail sector. Only market leader X5 Retail Group and Magnit are growing faster. The Corona crisis could intensify the positive dynamics.
Russian low-budget discounter Mere has launched its third store in Germany, in the city of Halle. Two other stores already exist in Leipzig and Zwickau. After almost a year of stagnation, Siberian parent company Torgservis seems to be pushing ahead with its expansion in Europe, eyeing also Lithuania and Poland.

The opening date for the first store in both countries has been announced as "early 2020". Mere is also making progress in Belarus, the Russians' first European foreign market, under the flag of Swetofor (Russian: traffic light). After the first store opened here in summer 2017, the store network has already grown to more than 30 branches.

From local hero to heavyweight

Since its launch in the Siberian city of Krasnoyarsk ten years ago, Torgservis has become a retailer of national importance in Russia. The no-frill discounter even made it into the top 10 in the Russian food retail sector last year, according to estimates by national market researchers. Swetofor stores can now be found in Moscow and even in Kaliningrad.

In 2019 Torgservis has expanded its mainly franchise-operated store network in the mother country by about 500 stores, information provider Infoline reports. This makes the company one of the fastest-growing food retailers in the country, behind market leader X5 Retail Group and Magnit.

Infoline CEO Ivan Fedyakov expects that the corona crisis will also have a positive effect on the discounter. "About 20 per cent of the Russian population lives at the poverty line," he says, so the low-cost format has a stable clientele. Market observers also see a positive development dynamic for the future due to falling purchasing power and consumer restraint in Russia.